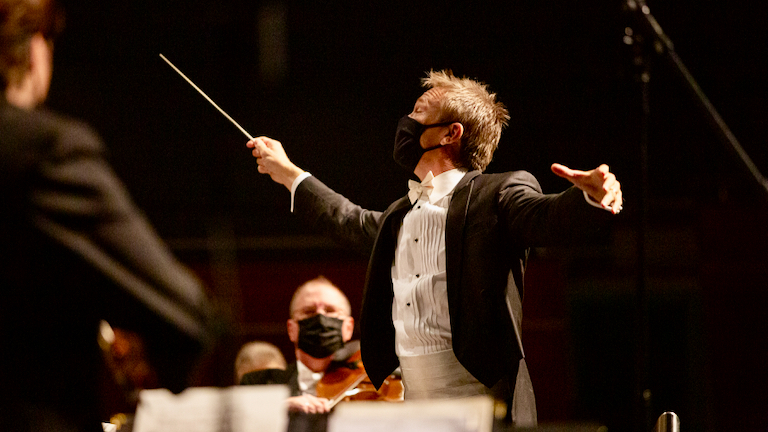 OKLAHOMA CITY (Free Press) — The Oklahoma City Philharmonic remains one of the crown jewels of the city’s artistic and high-cultural society, as well as the pinnacle of classical musicianship in OKC.

Like all other performing arts institutions, the past year has brought unprecedented struggle and change to the organization and how they approach their goal of communal entertainment. But for a group like the Phil, whose audience is primarily composed of older patrons, the lingering threat has to be handled very carefully.

“We’ve added these safety protocols that are, for this market at least, kind of strict,” said Susan Webb, the Philharmonic’s Director of Marketing. “The way that we see it is that right now we’re at a place on a continuum. We’re all still in the middle of this and we’re just doing our very best during, frankly, a very dark time in our history.”

Those comparatively strict policies will be in effect this weekend as the Philharmonic officially opens their season under vaccine requirements, mask mandates, limited gatherings, and contactless ticketing all simultaneously.

Whereas many venues within the music and performance industry have made the controversial decision to begin requiring proof of vaccination, very few are still requiring guests to wear masks after entry. Fewer still are demanding anything beyond vaccination of their performers.

“We have very stringent backstage protocols for our musicians and staff,” Webb explained. “Everyone is vaccinated. Everyone gets a PCR test [the deep nose-swabbing COVID test] before any performance even takes place. After last year, we’re all on high alert.”

The past year, while difficult for the Phil, also awarded them some bragging rights. Their recent press statements are quick to point out that they were a part of the just “23% of US orchestras that was able to present concerts in front of a live audience.”

They credit that success to their aggressive mask enforcement, limited seating, distancing requirements, and updated filtration system in the period before vaccines were widely available.

None of that translated into a particularly lucrative 2020 season, of course, but as Webb is proud to proclaim, it prevented their employees from facing the same layoffs and furloughs that the majority of the nation’s orchestra unfortunately saw.

With the vaccine requirement now in place, they are forgoing the limited seating in favor of a hopefully packed house, but have decided to continue enforcing masks within all areas of the Civic Center throughout the evening in light of the Delta Variant’s rapid spread.

“It’s all just to make sure that people can feel comfortable during the performance,” Webb said. “How can you enjoy music if you’re scared or stressed?”

As is now to be expected with this kind of policy announcement, there has been some irate response, though Webb claims that they’ve received “mostly very positive feedback,” which she attributes in part to the various options available to patrons who don’t wish to attend under the current protocols.

“We have programs in place that let people donate their tickets if they don’t want them, or let them forward them to later seasons,” she explained. “We’re not infringing on anyone’s rights or anything. We’re offering a lot of different choices for how people want to go about this. There’s no one dissenting voice, or one thing that people are pushing back against. There’s still freedom in the choices that we’re giving people.”

The decision to require contactless entry with online-purchased, virtual tickets has created a previously unforeseen issue, however, that the team has been working to mitigate.

“Most of our audience is adults in their 50’s or older,” Webb admitted, “most with no children at home or anything. So asking them to get tickets online at our website, we’re really kind of introducing an entire older generation to things like digital ticketing.”

Webb says that they’re crossing their fingers that the steps they’ve taken to help educate their audience on the online platform prove fruitful.

“We’ve included a video and instructions on our site to help people navigate that,” she said.

Ultimately, preparations for the Philharmonic’s season opener this weekend are daunting, difficult work. Everyone from the Civic Center staff getting ready to enforce the new restrictions to the press department keeping an eye out for the potential firestorm of negative comments that has befallen other businesses.

Even the musicians themselves are practicing and rehearsing overtime to be prepared in case any member of the orchestra falls ill. This season will be a major undertaking for the Phil, but one that its team is hoping will prove not only the longevity and adaptability of the organization, but also the importance of the medium within OKC’s culture.

“I believe a vibrant community needs a vibrant orchestra,” Webb told me. “Not being able to get together and enjoy things as a community for so long really makes you appreciate it so much more now that we can. There’s nothing like that collective energy.”

Fans can purchase tickets, check out the season’s upcoming schedule, and view the entire updated Health & Safety protocol at okcphil.org.