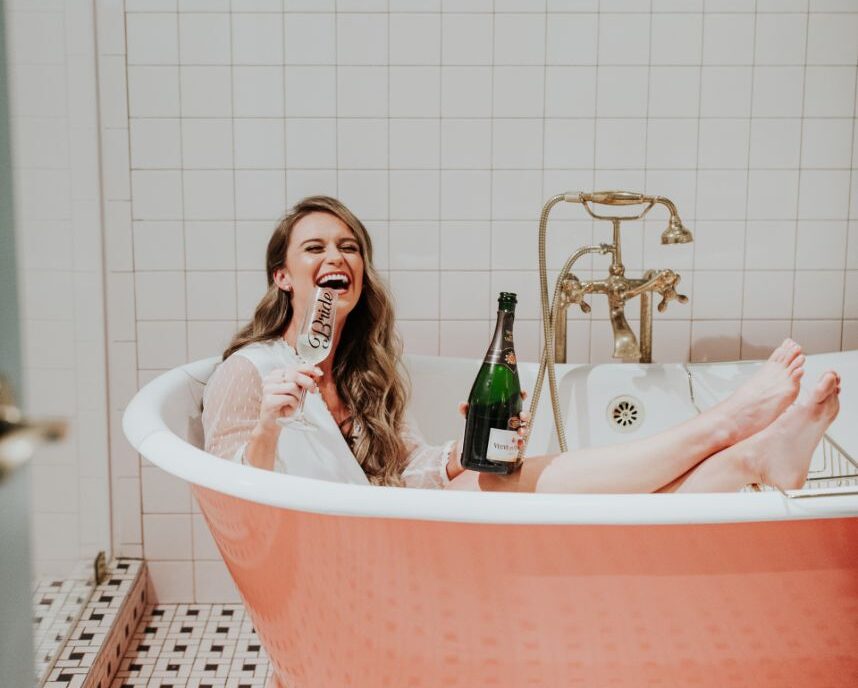 We are popping the bubbly to introduce Mr. and Mrs. Schoenhals with their classic black and white winter wedding! Courtland and Trev met in their sophomore year statistics class. However, Trev did not know Courtland’s name for the entire semester, but he finally learned and asked her out two years later. After a few date parties, football games and the help of their friends, they could not imagine their lives without one another.

Courtland and Trev chose to say “I do” with a classic black and white January wedding. Tara from Fête took the little vision Courtland had and turned it into her absolute dream wedding. Invitation suites from The Letter Box invited guests to this classic black and white affair. White florals from XO by Haleigh Kenney adorned the tabletops with gold accent decor from Mood Party Rentals and string lights from OKC Entertainment. Altogether, these elements created the most glamorous reception space.

Courtland opted to do a first look with her stepfather and little brother, which is a moment Courtland explained, “she will cherish forever.” After happy tears were shed with Courtland’s brother and stepfather, the bride revealed her look to her groom. Trev became speechless as he looked at his bride for the first time. Cortland’s stunning bridal look was complete with a gown and veil from J.J. Kelly Bridal Salon and makeup by Brushed Salon and Makeup Studio. KGC Photography captured every moment of the day so beautifully. One of our favorite moments captured is Pistol Pete’s surprise appearance! The couple ended the night with Hideaway Pizza before heading to the Omni Oklahoma City Hotel. Keep scrolling to see precious images from this classic black and white winter wedding and a special note from the bride. Cheers to Mr. and Mrs. Schoenhals!

From the bride on her most helpful vendor: “From the moment I met Tara Towns from Fête, I knew she would be a pleasure to work with. She took what little vision I had for our wedding and made an absolute dream day come to fruition seamlessly. We stayed impressed with her humble nature, kind spirit and, of course, her talent.”

The post Pop the Bubbly for this Classic Black and White Winter Wedding appeared first on Brides of Oklahoma.