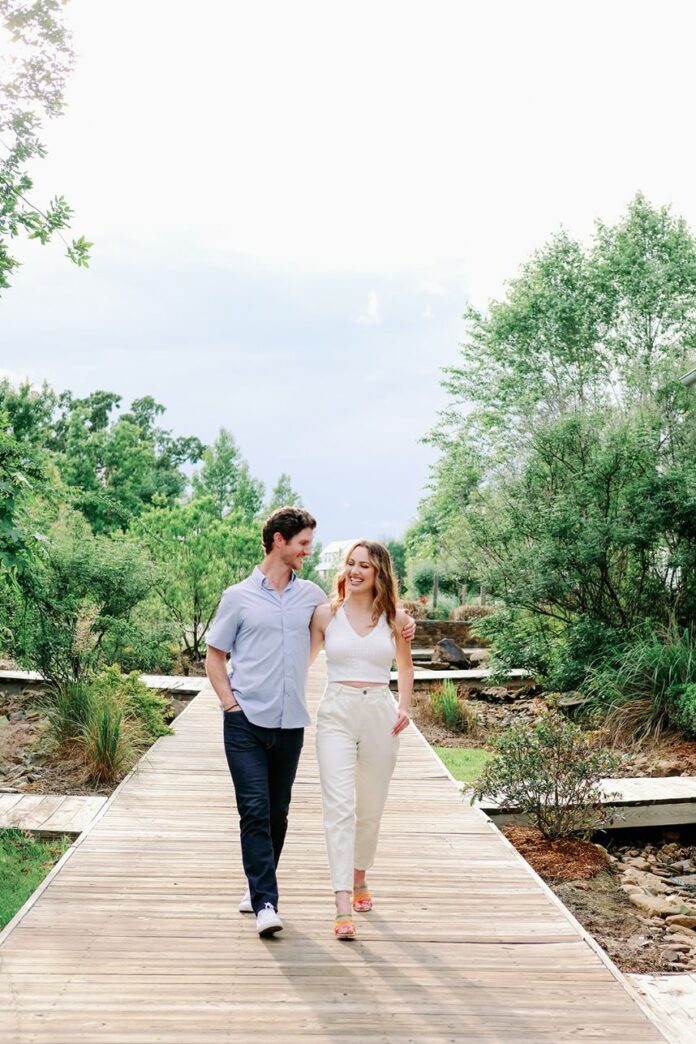 Rachel and Randy enjoy the lake, summertime, and traveling so their summer engagement session captured on digital and film by Danielle Villemarette & Co. around Carlton Landing on Lake Eufala was the perfect way for them to document their love. The two first met through a mutual friend who wanted to set the two up despite both of them being reluctant. However, Randy eventually decided to reach out and ask if Rachel would be interested in getting lunch or coffee sometime. He had her at caffeine! The pair met up, immediately hit it off, and haven’t looked back since! Now married, these two tied the knot in a July ceremony followed by a dreamy reception at The Yale Theater where they combined a palette of pinks, red, and just a hint of lavender to create the ideal wedding day mood. We can’t wait to see it all come together, but for now check out their gallery of sweet, light-filled summer engagement photos! Plus, read on for a note from bride Rachel about how Randy popped the question in an adorable, tear-jerking proposal – down below. Cheers to the new Mr. and Mrs. Green! From the bride on how he asked: “He had a couple of my friends come and meet me at my home early on a Sunday morning, which threw me off because I was trying to rush out the door to make it to church on time. My friends said they were going to take me on an adventure and had a picture frame that had been sitting in my living room for the past couple of weeks, but I knew, this was THE time. So they took me to Mary Eddy’s which is where our first official dinner date was (after the coffee date). My dad was there with some flowers and a note that Randy had written about all the great qualities that my dad and I shared. Tearjerker! So then my friends took me to the next stop which was Scuba Bros. We love to scuba so that was where his mom and dad were there and they had a note written by Randy and his mom and dad both had a note that they had written to me as well. TEARJERKER! He had me get on the sailboat at Lake Hefner, we sailed across the lake over to the other dock and then that’s where he had a big group of my family and a ton of friends gather and proposed on the dock there.”

The post Romantic Lakeside Summer Engagement with the Dreamiest Lighting appeared first on Brides of Oklahoma.