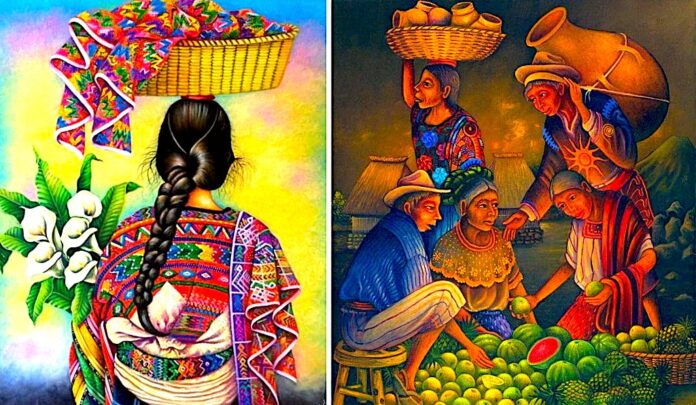 The Mayan Art Exhibit will celebrate the bicentennial of independence for Mexico and Central America, which occurred in September 1821.

From a very young age, Hilario Efrain Xitamul Roquel loved to paint and by 2015 he began to sell his artwork internationally, particularly in California and Spain. The following year he was hired as an art teacher at the Quezaltenango School of Art, where we taught children aged 8–12. He distinguishes himself from other artists through his meticulous selection of themes, colors and styles for each painting.

“Recollecion de Café,”one of Sergio Josue Cuy Saloj’s paintings, was inspired by his childhood memories of harvesting coffee beans with his parents. From November until  February, his family would travel up into the mountains during the annual harvest season. He distinguishes himself from other artists from Sololá, Guatemala, through his careful nature when approaching all aspects of his work. While other artists are able to work for a commission, Sergio cannot paint unless he is fully inspired to work, according to the press release He believes that even small work requires an immense amount of preparation, matching that of his larger works. Sergio is known to reflect over his ideas for hours until the most opportune moment arises, which is why he often works while others sleep, the release noted.

At a very young age, Lucía Anabela Xitamul Roquel de Cotuc loved to paint, often entering contests where she often placed first. As one of the leading artist of Sololá due to her brilliant use of her brush and canvas, her pieces are displayed throughout Guatemala. She began painting in 1998 in Sololá, and became one of the most well-known artists of that Guatemalan city because of her brilliant artwork and her advocacy for all artists. She focuses her work on the daily lives of Indigenous towns and their citizens. Her work can be seen all throughout Central America. Known for her process while painting, Lucia will start at one corner and progress from there, painting the final version from the start. Observers note that her works of art are so impactful due to her “ability to work with contrasts and the direct relation between the lights and darks.”

In 2010, while living in Sololá, Yoselyn Anabella Cotuc Xitamul first mixed different tints of aniline, a fabric dye, with tree sap in order to paint. She and one of her siblings followed in their father’s footsteps and became groundbreaking artists. As a child, she would often accompany her father to visit his friend in Quetzaltenango. She was fascinated by color’s ability to create scenes of daily life on canvas. Talented from an early age, Yoselyn’s family supported the development of her artistic skills. Her artwork often reflects the daily lives of Indigenous towns or relates to traditional themes of Guatemala.

The Mayan Art Exhibit and the Guatemalan Cultural Celebration are free and open to the public, and will take place on the first floor of the OHC.

For more information about the OHS, visit okhistory.org.

Fiestas Patrias to Be Held at Bicentennial Park